The annual Heritage Open Days were last week. Our ambitions were low: we considered various nearby venues open for them, and made it to one. But I'm glad we did, getting to know a local building, its history, and the way it fits in with other aspects of the town.

At some point, if they get a grant to fund it, they're going to remodel their kitchen so as to have a modern catering kitchen. Currently, they have this gas cooker: 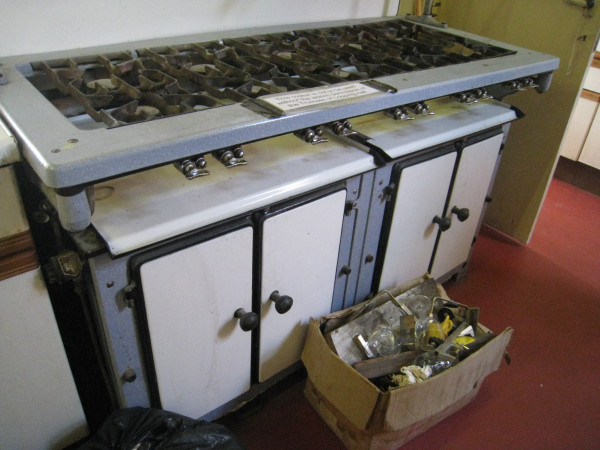 Which, fantastic as it is in its way, is currently a hazard and is off-limits for actual use, after an accident with an unwitting would-be user, poor labeling, and too many gas rings. Our tour guide said they didn't know when the stove was from, and I offered to look into it. I haven't gotten too far.

The ovens are controlled by a "Mainstat", a control advertised by the Main company which sold stoves and cookers with advertising primarily in the 1930s and 40s, so far as I can tell from online advertising copy and the tie-in cookbook, The Main Cookery Book, by Marguerite K. Gompertz.

Surely, this photo is of a label from the same company, in which case it's R&A Main Ltd, which amalgamated with Edmonton (London)-based Glover & Co by 1899, although the companies continues to produce stoves under their respective brands in Falkirk and Edmonton, so that's no help to dating. (But here's the Falkirk factory, seen from the air in 1939!)

The factory had a horse named "Bob" apparently. Also, an interesting locomotive history. An article on last year's Tottenham Riots tells me this about the factory:

Almost every gas cooker used in British homes after World War II was made by Glover and Main at the Gothic Works in Angel Road Edmonton, which closed in 1983. The land was derelict for over twenty years until an IKEA Store opened in Glover Close (named after the factory) in 2005.

So if you visit the Edmonton IKEA (as I have a number of times in past years), pause a moment and think of the Glover & Main factory, with its interesting locomotive connections.
Collapse