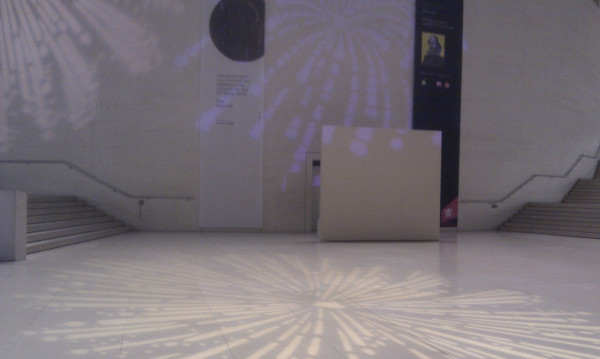 Staging the World at the British Museum struck me as a lavishly-produced pro forma sort of exhibit, an easy one to do with predominantly in-country loans and Cultural Olympiad funding. It wasn't a major exhibit, but it had its highlights.

It began well, with the murmur of an audience settling into place for the production in the narrow dark corridor leading to the main exhibition space. After that, it used Shakespeare as the framework for a material culture history of Britain in his time, with token examples of interesting tools mentioned in his plays - including a clock - and a satisfying swathe of maps in multiple media, both of parts of the British Isles, Venice, and globes and a medal of the world entire. (The substantial section on Venice was justified not only by plays, but by it being a city which analogized London to Londoners - crowded, multicultural, and ruling the waves, I suppose.)

The exhibition was done in conjunction with the Royal Shakespeare Company, which provided some riveting moments of speech and video done especially for the exhibit. They were good in their own right, but also a repetitious distraction from trying to slowly work through any other material which shared their gallery space. My favorite of these by far was a silent work of video, a black-suited actor getting into the head and body space of Richard III as villain.

I finally felt that the show had been worth seeing on today of all days because of a section devoted to Guy Fawkes and its possible influences on Macbeth. And there really were a lot of good maps.

Outside in the atrium, lights splashed silhouettes of fireworks on the stone, and I appreciated how easy it is to get around the city without a small griffin in tow.
Collapse